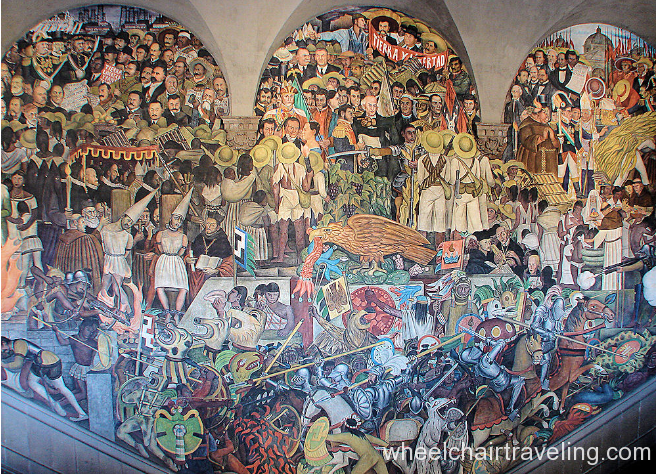 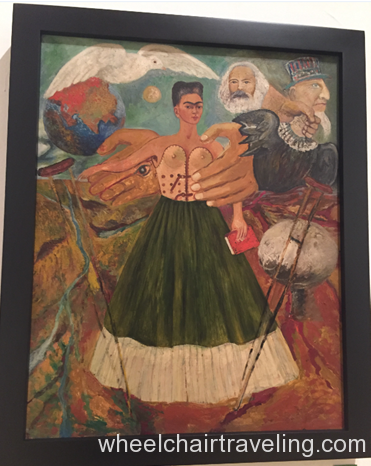 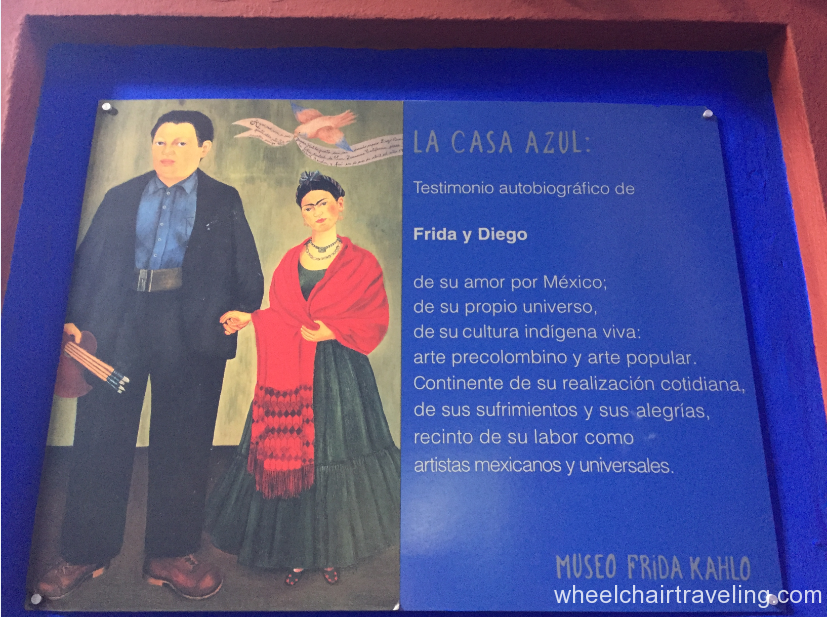 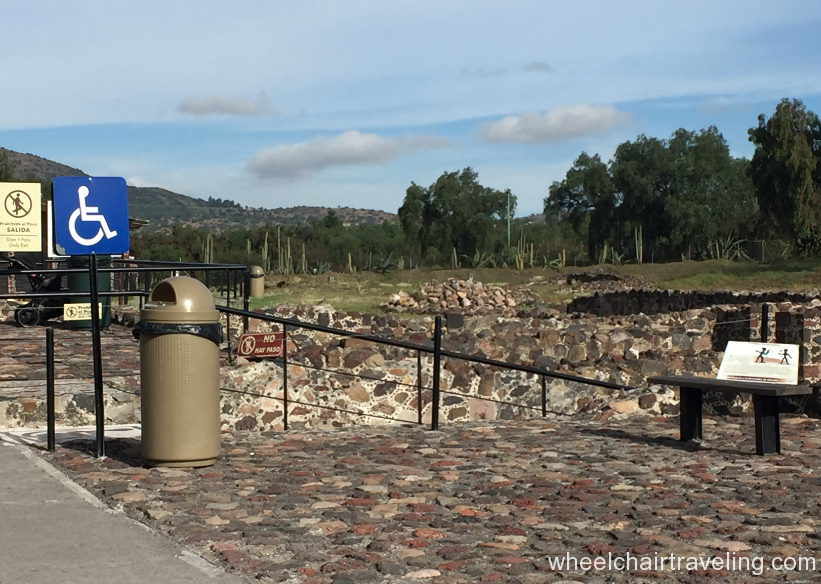 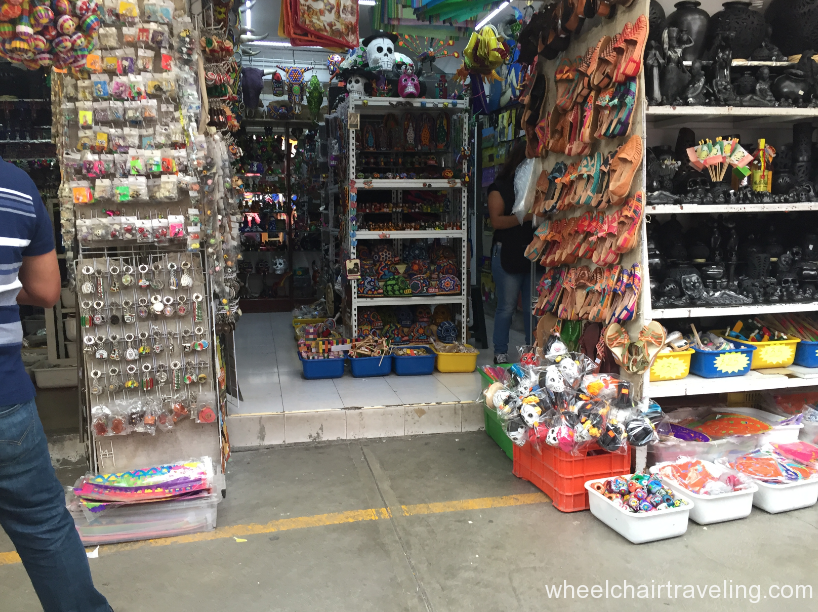 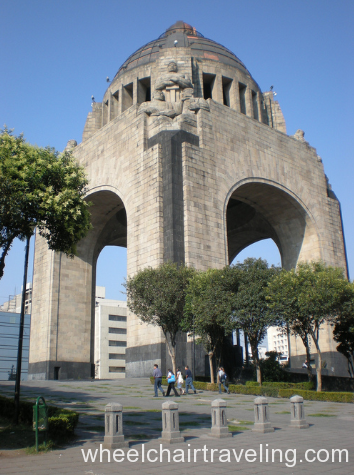 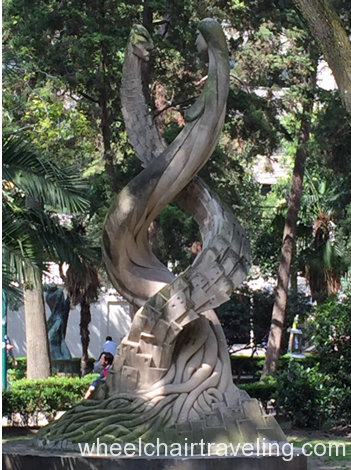 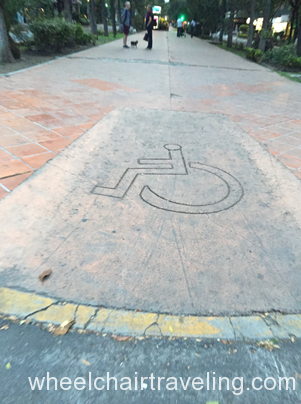 Robert did not make this trip with me, but I thought I would write it up anyway as I think it could be helpful.  I spent about a week in September 2016, partially for work and partially for pleasure.

For the pleasure part, I stayed with a friend in Polanco.  For the work part, I stayed in the Sheraton Santa Fe in Santa Fe.  Santa Fe is a relatively new area, and is a major business district.  While there is not much to do there from a tourism perspective, it has some of the most interesting buildings I’ve ever seen.  I would encourage a drive through the area (when it is not peak traffic time), just to see the architecture.

Polanco is closer to the center of town, and a better place to stay for tourism.  It is an upscale, walkable area with lots of shopping and restaurants.

We used a tour guide who was very inexpensive and extremely knowledgeable about Mexico City.  His wife works for the US Embassy and he is commonly used for guests.  I would highly recommend him – his name is Leonal Rivera Aguilar (www.mexicocitytours.net – you will find very positive reviews on TripAdvisor and Yelp).  He drove us to the pyramids and to the Basilica for $45/per person, which was well worth it.  He can do any kind of tour you’d like around Mexico City.

Pirámides de Teotihuacán (Pyramids of Teotihuacan)
The pyramids are about an hour outside of Mexico City.  They are well worth the drive.  There are two of them – Sol (sun) and Luna (moon).  While it is not possible to climb them if you’re in a chair, there is a lot to see from the base and a LOT of interesting history.  While there, you will also find excavated tunnels which show how the people lived.  These tunnels are wheelchair accessible, as are the restrooms that are nearby.  It’s a good idea to go first thing in the morning before the crowds arrive.  Leo picked us up at 7:30am and it was perfect – still cool and not too crowded.  When we left, cars were lined up for at least a mile.

Basílica de Guadalupe
You can visit the Basilica on the way back to Mexico City from the pyramids.  The Basilica is actually made up of four different chapels, representing four sightings of the Virgin of Guadalupe.  They are breathtaking, built at very different times and each one is a completely different experience.  I didn’t enter all four, but the two main ones are wheelchair accessible.   One of these was built in the 1970s, and the other in the 1800s, and they are both spectacular.

National Palace
The National Palace and many beautiful government buildings can be found on the Plaza Mayor.  Parts of the National Palace are open for visitors at no charge.  The main stairwell and halls of the palace have large murals painted by Diego Rivera.  The intent was to paint all of the wall space on the second floor, but it was never finished.  They are really incredible.  The lower level is fully accessible.  There are elevators to the 2nd floor, but you will need to ask for them – they are not typically open.

Monumento de la Revolución (Revolution Monument)
We went to this monument on a whim, and it ended up being a highlight of the trip.  The monument was originally begun in 1907 to memorialize the 100th anniversary of the liberation from Spain.  However, for a variety of reasons it alternatively sat dormant and was constructed or reconstructed over the next 100 years.  It is now a monument to the revolution, and for 50 pesos (about $3) you can go to the top and have a 360 degree view of the city.  For 110 pesos, you can go on an in-depth tour of the monument, but it is unfortunately not accessible for anyone with any mobility issues – lots of narrow stairwells and difficult-to-maneuver passageways.

La Casa Azul
La Casa Azul is in Coyoacán, a suburb of Mexico City.  It is the home of the famous painter Frida Kahlo and her husband Diego Rivera.  It is well worth the visit.  The majority of the home and the entire garden are accessible – the only inaccessible part is her studio, her day bedroom and her night bedroom.  Here you can see where she lived from her birth until her death, and view many of her paintings, her clothing, and generally how she lived.  When she was a young child, she contracted polio.  As a teenager, she was in a near-fatal bus accident.  For the rest of her life she underwent multiple surgeries and had to utilize wheelchairs and crutches.  Her disability and the impact it had on her life figures prominently in her paintings.

Mercado Coyoacán (Coyoacan Market)
This market is a few blocks from La Casa Azul.  It is generally accessible, but VERY tight.  It is primarily a market for locals with small eateries, food, and articles for the home.  You will also find a few handicraft stalls.  Although there aren’t many handicrafts in this market, the quality of the ones you’ll find is high and the prices are very good.  On the weekend, there is also a painter’s market in the park across the street.  It is filled with local artists and a great place to purchase local artwork.

La Ciudadela Market
La Ciudadela is the main handicraft market in Mexico City.  It is very large and can be overwhelming, but you can do all of your gift shopping there.  It is a maze – I’m sure there is a method to it, but I couldn’t figure it out.  The aisles are certainly wide enough for wheelchairs and it is accessible to enter the market in general, but very difficult to enter most of the stalls as they are as full of products as they can possibly be.

In General
For transportation, Uber is well-entrenched in Mexico City and the recommended mode of travel if you have a manual chair.  It is VERY inexpensive!

Mexico City seemed to be as accessible as any major Latin American city I’ve visited – it could always be better, but clearly efforts have been made.  Most major streets have decent sidewalks and good curb cuts.  The majority of stores and restaurants that I saw had either constructed ramps or ramps added onto older buildings.  However, I did not go to a single restaurant with an accessible restroom.  Several of them required going to another floor, and most of them had narrow doors and minimal maneuvering space.  Interestingly, I never saw a single car parked in a handicapped parking space (and they are everywhere).  I also never saw anyone in a wheelchair under their own power – always older people being pushed.  However, I saw many people in wheelchairs working at the airport.

As a closing note, many of the wheelchair parking spaces I saw had a sign that said, “Respétalos.  Nunca sabes cuando los podrías necesitar” – Respect these spaces.  You never know when you might need them.  We could use that sign in our spaces in the US.

Robert and Laura Lea are avid global travelers. Robert has used a manual wheelchair for 35 years after a spinal cord injury and has traveled all his life. He works at Shepherd Center in Atlanta helping newly injured patients wade through the complicated mess of applying for federal and local benefits. Laura Lea works in organizational development for Equifax, a role that takes her around the world. They love to veer off of the beaten path wherever they go and engage with the local communities, learning more about different cultures.

Where there any Uber vehicles or taxis accessible to power wheelchairs?

Dear Laura, Thank you for your helpful article about navigating Mexico City in a wheelchair. I suffer from spinal stenosis which makes walking more than a few steps painful. Leo sounds like the perfect guide for me when I visit Mexico City in mid -September, and I have contacted him in the hope that he can guide me for a few days. I am new to wheelchair travel, and your suggestions about the various sites encouraged me to see them for myself. Ever since my back condition worsened, I travel with my own lightweight collapsible wheelchair. Thus far, it has… Read more »