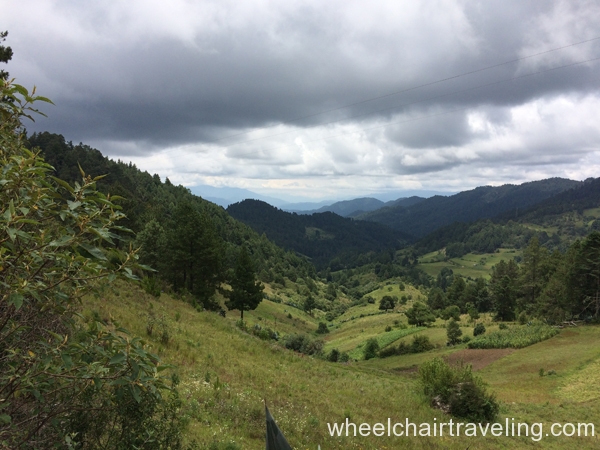 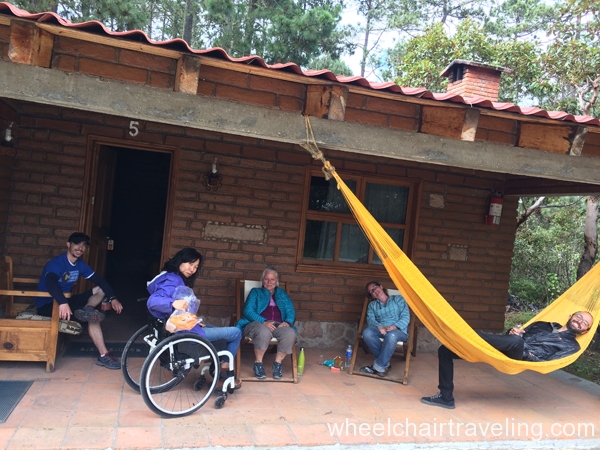 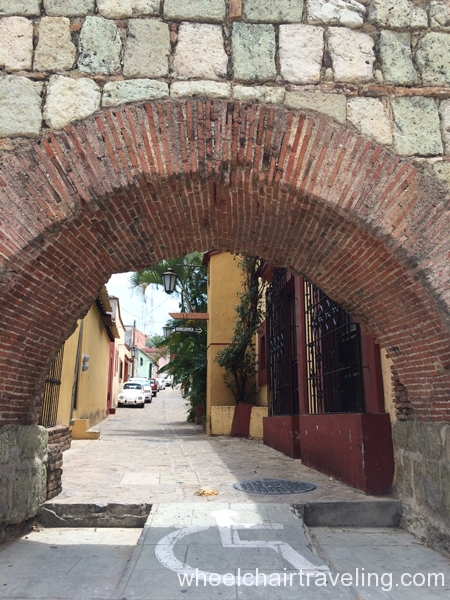 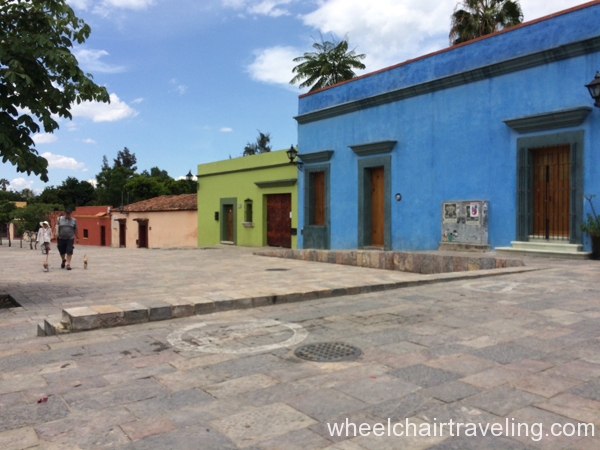 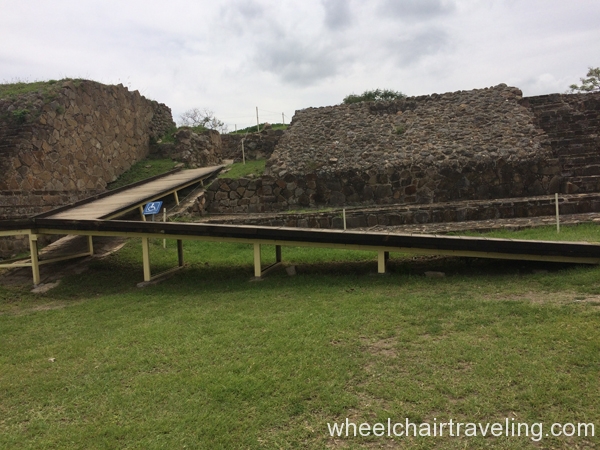 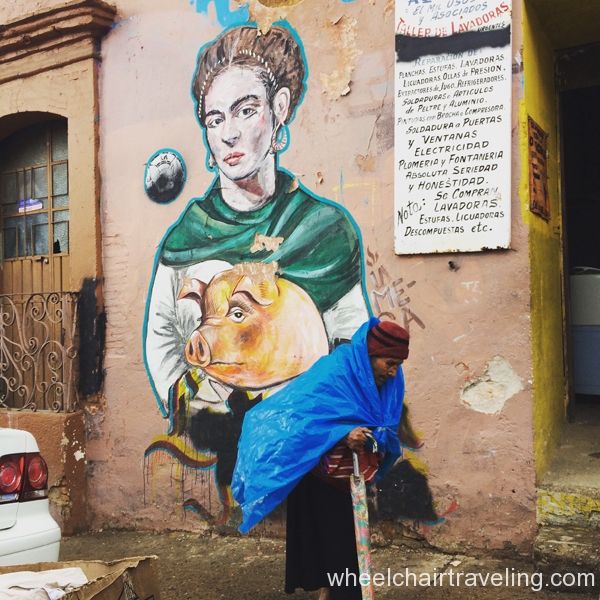 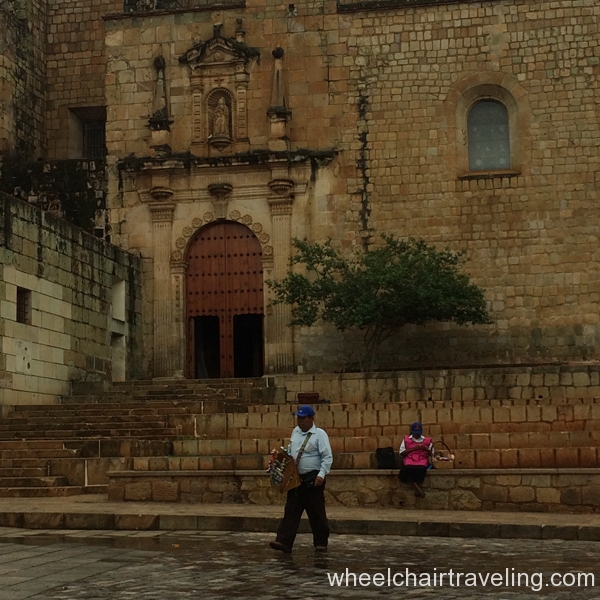 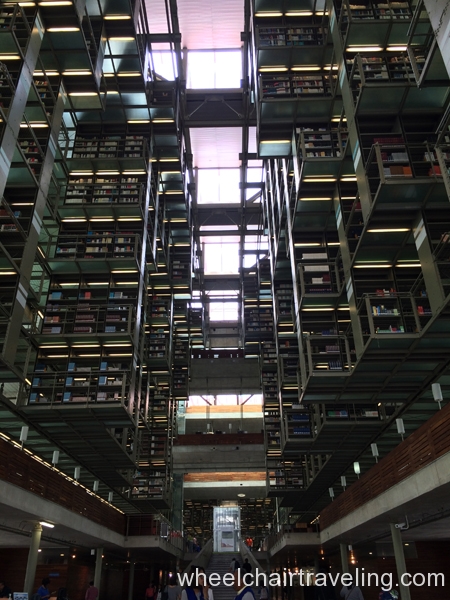 I am a T2 paraplegic and I travelled through Mexico for a month in a manual chair with my boyfriend, who is not in a wheelchair in 2016. I spent the majority of my time in the city of Oaxaca and a few days in Mexico City. Depending on where you visit, you will likely encounter varying levels of accessibility as the country is adopting public accessibility features at different rates. Nonetheless, both Oaxaca and Mexico City are incredibly interesting and rich cities in their own way and are worth the journey.

Mexico City is a bustling and cosmopolitan city. Accessibility in the streets was generally manageable (though sometimes the condition of sidewalks and curb cuts are questionable), especially in more modern or touristy areas such as el Polanco, la Condesa, or Roma Norte/Sur.

The city of Oaxaca is the center of Oaxaca state, one of the southernmost states of Mexico. In general it is less of a tourist destination than the beach resort cities like Cancún so discovering the local rhythm of life and escaping hordes of people speaking English is easier; however, accessibility is less modern so expect some obstacles.

Transportation: Taxis, Traveling from City to City, and Renting a Car

The easiest way to reach Oaxaca from larger hubs like Mexico City or Cancún is to fly. AeroMexico, Interjet, and Volaris are some domestic airlines that have relatively inexpensive and regular flights to Oaxaca. I requested an aisle chair at the airport when I checked in since there wasn’t an option to request it online (the word for aisle chair is silla de pasillo).

Bus travel is also possible and would be much cheaper but could take several hours and be less accessible. There are different tiers of buses: Second Class, First Class, and Deluxe. I took the Deluxe overnight bus from Oaxaca to a city called Puebla. At the Oaxaca station they provided an aisle chair into the bus, and there was a restroom onboard. However, there was no aisle chair at the Puebla destination so I had to be carried off the bus. Just be aware that accessibility is not consistent!

While in Oaxaca the best mode of transportation besides walking/rolling is taxi (Uber hasn’t reached Oaxaca yet) as the only public transportation are old buses. A taxi ride across town was an average of 50 pesos (about $3). However, Uber does exist in larger cities like Mexico City and Puebla.

We rented a car to do a weekend trip in the mountains. There are several car rental locations in the city center, all of which are about the same. The daily rate for a car is only about $10 USD/day but you are required to purchase Mexican car insurance each day, about $40 USD/day. Renting a car was definitely easier than finding the small buses or colectivos to get out of town. FYI, no hand controls and many cars are manual!

The simplest way to get around for me was to Uber. There is an extensive metro system, however accessibility is not always consistent. For example, there may be an elevator into the station from the street but not to the platform. The city is making efforts to incorporate accessibility though, the accessible metro stations have elevators exclusively for the disabled that can only be unlocked by the police in the station or by a special access card that you can apply for! Here is a website listing station access. The metrobus, which is like a light rail that runs above ground in the street is way more accessible and even has designated cars for people with disabilities and women. Not every stop is accessible so best to ask the police officer at the station that you board (every station has an officer).

Once in Oaxaca I highly recommend staying in the centro, where most streets have curb cuts and where most of the tourist attractions are. The center of the city possesses a colonial charm with its brightly painted buildings as well as examples of the indigenous diversity in the colorful textiles and handicrafts sold on the streets and in artisan workshops. However, the vast majority of buildings are older and lack elevators or lifts, even in museums and tourist attractions. In fact, most businesses and residences have at least one step into the entrance, so it is helpful to have a travel companion. If you ask though, sometimes shopkeepers have wooden ramps (una rampa) that they bring out for wheelchair users. The locals, and Mexican people in general, were really friendly and always eager to help out so asking a stranger for some assistance is always an option if you feel comfortable and can manage a little Spanish.

I stayed in an AirBnb, which I would not recommend because it was difficult to find anything remotely accessible. There are some beautiful hotels and hostels throughout the city, many of which I noticed have a step at the entrance but if you call ahead it is likely that they will make accommodations. Bathrooms were often a challenge as the majority of restrooms do not have accessible stalls. Even those that were marked accessible barely fit my chair, so using the restroom in hotels is your best bet. The one hotel in a modern building that I saw near the city center was One Hotel.

Oaxaca Points of Interest (Around the City & Day-Trips)

Carina sustained a T2 complete spinal cord injury after a car accident when she was 26. Since then she has continued to pursue her love of travel and making music. She is currently an apprentice dancer at Axis Dance in Oakland, CA. She has a personal blog about her life and travels www.rollwithbigresults.com. She is also embarking on a solo music project www.onwardhomusic.com.