The historic town of Bisbee is nestled in Tombstone Canyon in the Mule Mountains in southeastern Arizona. The community was founded in 1880 when the local mining camp became one of the richest mineral sites in the world.

This “Queen of the Copper Camps” produced almost three million ounces of gold and over eight billion pounds of copper, as well as silver, lead, and zinc. By the early 1900s, Bisbee’s population had topped 20,000 and it was the largest town between St. Louis and San Francisco. Its notorious Brewery Gulch boasted 47 saloons, but it was also home to the state’s first community library, an opera house, and the state’s oldest ball fields and first golf course.

Bisbee remained a thriving town until the mine became unprofitable in the 1970s and the miners drifted away. Soon artisans moved into the area, finding Bisbee an attractive and inexpensive place to ply their crafts. Now tourists visit Bisbee to explore the historic buildings, browse in eclectic antique shops and art galleries, tour the Queen Mine and museum, or participate in one of many festivals and special events that are held throughout the year. Other nearby attractions include the town of Tombstone, site of the OK Corral (25 miles away), and the Whitewater Draw wetlands that attract hundreds of migrating sandhill cranes each winter (30 miles away). 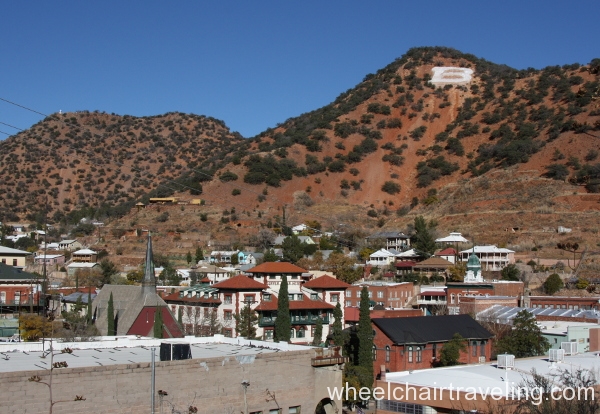 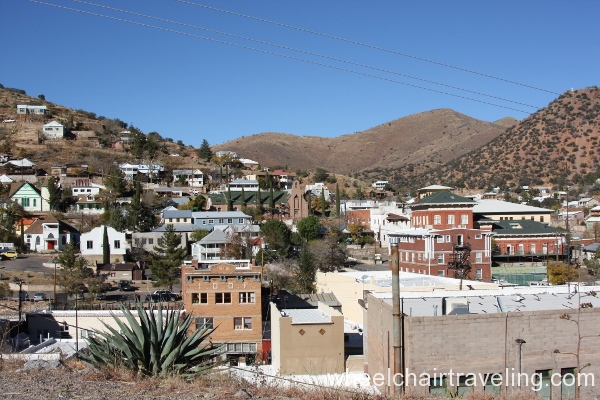 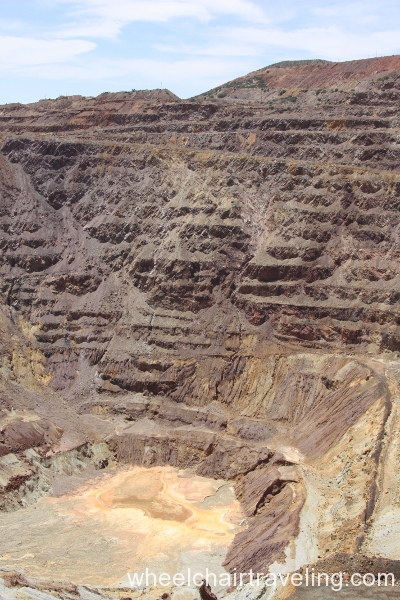 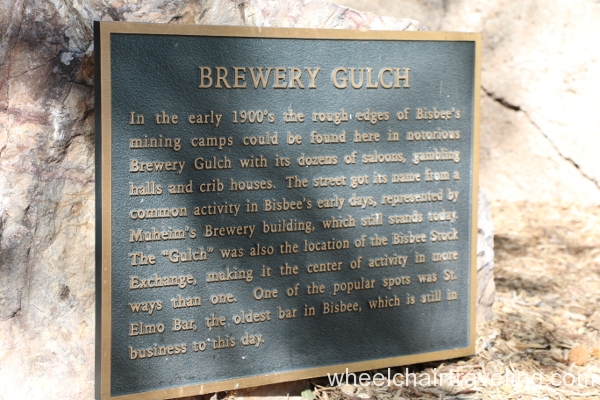 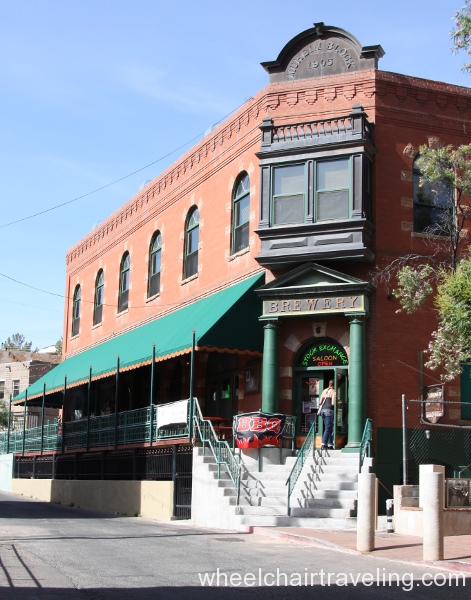 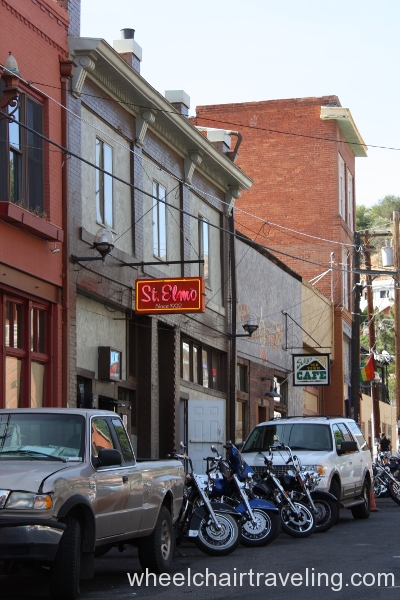 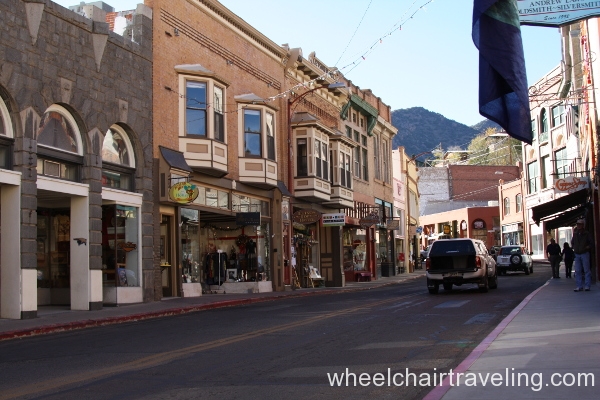 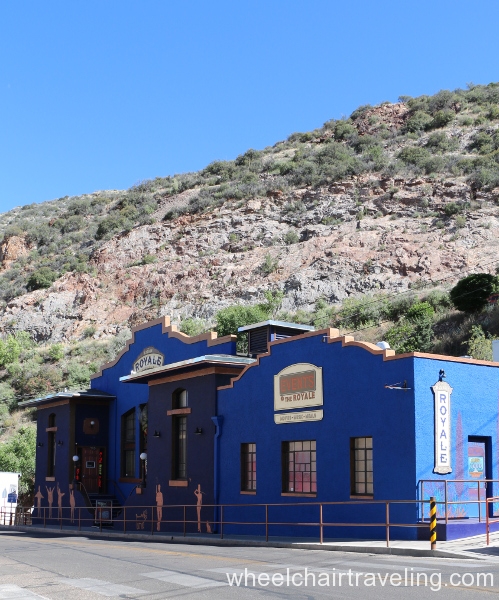 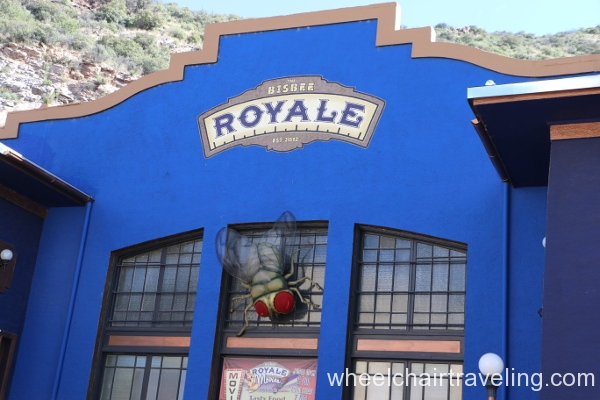 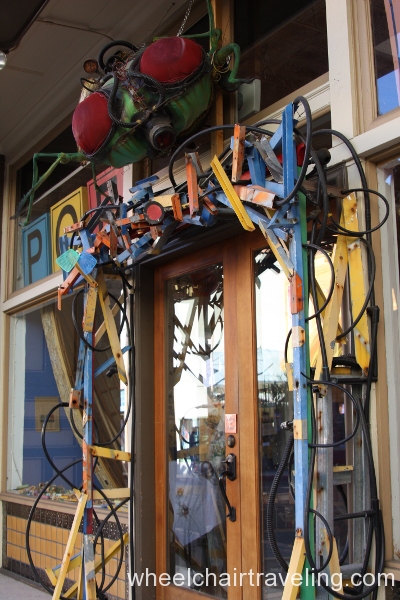 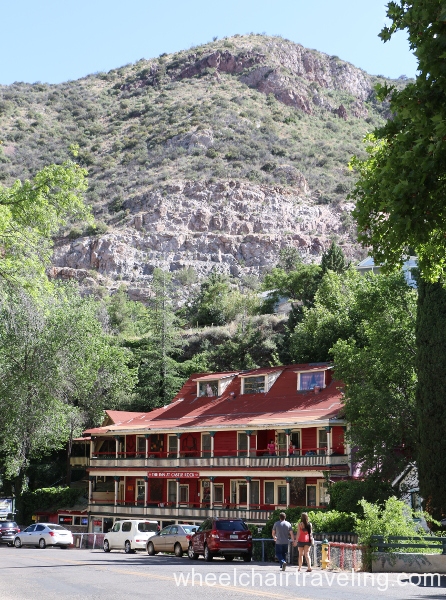 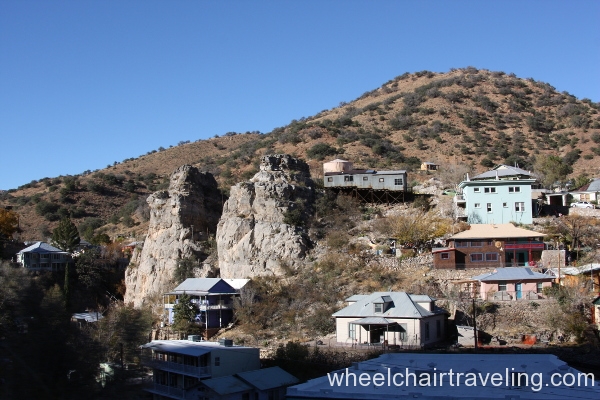 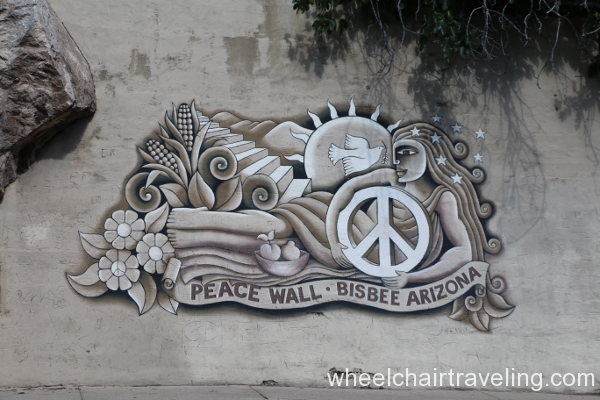 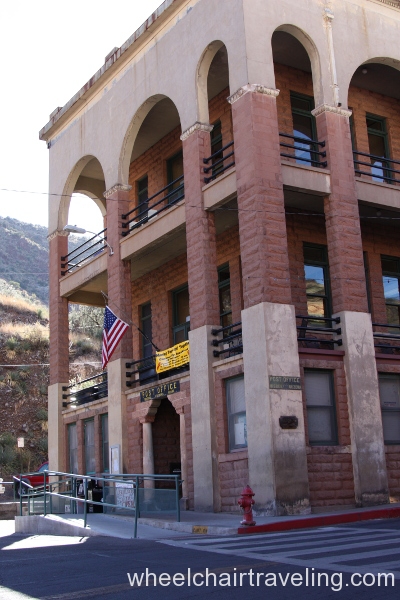 The hills and historic buildings in Bisbee do make it a challenge for wheelchair users but it is possible – It’s the Wild West, pack your spirit of adventure! The guided tour of the underground Queen Mine is not accessible, but there is a drive-up overlook of the Lavendar Pit mine with interpretative exhibits. The Bisbee Mining Museum and Historical Museum has an accessible side entrance and a lift to the upstairs. Some exhibits of mining equipment are outside on the grounds. A small public garden next to the museum has benches and an accessible public restroom. The sidewalks on the main downtown street where most of the shops and galleries are located have curb cuts and crosswalks.

Some of the shops have level entrances and some have 1-2 steps at the threshold. I recommend a helper for the hills and an occasional step. It is also possible to drive a few blocks from one accessible parking space to another to avoid some grades (for instance from the Copper Queen around the block into Brewery Gulch). The restaurant in the Copper Queen and Santiago’s Mexican (on the same street with the hotel) are both accessible. The historic Stock Exchange building in Brewery Gulch has been converted into a restaurant and bar with a ramp and accessible restroom. The St. Elmo Bar in Brewery Gulch is Arizona’s longest-operating bar – over 100 years. It’s a small place but it’s possible to get into the bar area (two steps up to the bandstand and dance floor). The restrooms are not accessible; they are small and there is a step up and tight turn into the ladies’. I was able to use the mens’ in a pinch because they are single-stall and it has a level entrance.

Jeannette has used a manual wheelchair for mobility since an automobile accident in the early 80's. She spent many years working as an advocate for people with disabilities; promoting the passage of the Americans With Disabilities Act, serving as Miss Wheelchair Virginia, and writing the grant to found an independent living center where she was elected Chairman of the Board and implemented an advocacy training program. Now semi-retired, she enjoys traveling with her husband, riding her handcycle, and having more time to spend on photography and art.