Disable person complains AirAsia about failed compensation while his wheelchair gets damaged.

A wheelchair worth over ten thousand ringgit has been damaged but no reasonable compensation has been made so far. Lim Sow Seng (Seng) from Kuantan urges AirAsia to revise its insurance terms and conditions so that this kind of incident can be prevented from happening again and will guarantee the rights of other disabled people.

Seng said he came back to Malaysia from Taiwan by taking an AirAsia plane on 13th November. When he got off the plane, he got back his own wheelchair with the help of the flight attendants. Unexpectedly, he found out that the frame of his wheelchair was slightly distorted. The front castor on the left side was about 0.5 centimeters away from the ground. It was suspected that without proper safekeeping the wheelchair had been damaged when it was folded and stored in the luggage compartment of the plane.

“This wheelchair was imported from the US. It’s worth 11 hundred thousand ringgit. It was custom-made according to my the height, body shape and weight, and it was made of very solid materials. It’s estimated that its shelf life could be about ten years if it wasn’t severely impacted or damaged. I had this wheelchair for over a year and there hadn’t been any problem with it.,” explains Seng. “Now, this wheelchair has been damaged. Its safety and practicability have been affected as well. Later I fell out of the wheelchair due to its imbalance.”

Seng said this while former state assemblyman Lee Chean Chung from The People’s Justice Party in Semambu held a press conference. He said that he had made a complaint once he got off the plane that day. He also made a written complaint to AirAsia to demand compensation. Nevertheless, the company replied and said that a wheelchair was not classified as passenger luggage. It was not an item covered the company’s insurance policy. “The Department of Civil Aviation says AirAsia has to be responsible,” says Lee Chean Chung, adding that he and Seng made a complaint to AirAsia after the incident, but they were turned away. Therefore, they reached out to the Department of Civil Aviation and were told that the airline had to compensate the customers if their medical equipment were damaged. “So, we’ve discussed with the person in charge of the airline and he asked the person concerned to submit his relevant documents again for making a compensation claim. “ 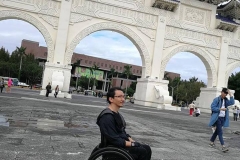 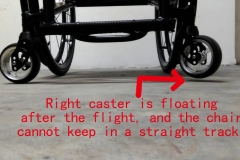 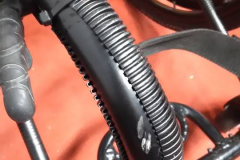